Comments on May Housing Starts

Earlier: Housing Starts increased to 1.350 Million Annual Rate in May

Both multi-family and single family starts were up solidly year-over-year.

This first graph shows the month to month comparison for total starts between 2017 (blue) and 2018 (red). 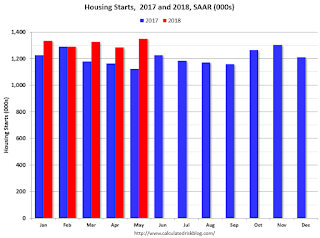 Note that starts in March, April and May of 2017 were weaker than other months, so this was a solid increase, but also a fairly easy comparison.

Through five months, starts are up 11.0% year-to-date compared to the same period in 2017. 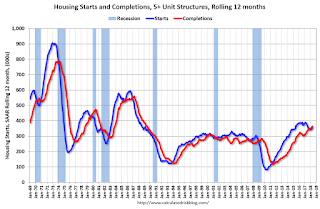 The rolling 12 month total for starts (blue line) increased steadily for several years following the great recession – but has turned down recently.  Completions (red line) had lagged behind – however completions have caught up to starts (more deliveries).

It is likely that both starts and completions, on rolling 12 months basis, will now move mostly sideways. 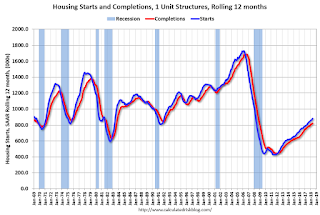