Results from the June Manufacturing Business Outlook Survey suggest continued expansion of the region’s manufacturing sector. All the broad indicators remained positive, although the indicators for general activity and new orders fell notably. The firms continued to report higher prices for purchased inputs and their own manufactured goods. Expectations for the next six months continued to moderate but remain positive overall.

The diffusion index for current general activity remained positive but decreased 15 points this month. Almost 37 percent of the manufacturers reported increases in overall activity this month, while 17 percent reported decreases. … The firms continued to report overall increases in employment. Nearly 34 percent of the responding firms reported increases in employment this month, while 3 percent reported decreases. The current employment index, at 30.4, was virtually unchanged from May. The current average workweek index, however, decreased 10 points.
emphasis added 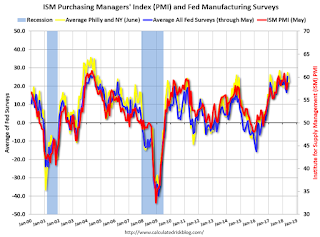 This suggests the ISM manufacturing index will show solid expansion again in June, but probably weaker than in May.