A Meeting with the Principal Resulted in Teacher’s Stroke: Worker’s Comp Denied

An employee walks into a meeting with her supervisor in good health. The supervisor criticizes her work performance, which upsets the employee. Shortly after the meeting, the employee suffers a medical problem that a doctor attributes to the contentious encounter. She makes a claim for workers’ compensation benefits. Is she entitled to benefits? That was the question the North Carolina Court of Appeals was recently asked to address. 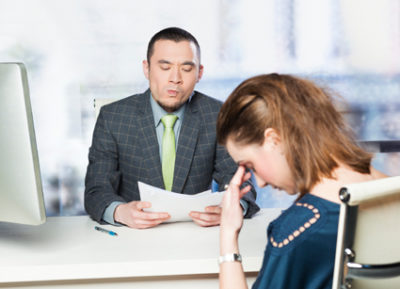 In January 2010, Alina Cohen was hired by Franklin County Schools to work as a full-time math teacher at Early College High School. At the beginning of the school year, each teacher at Early College is required to create an individual professional development plan (PDP) that states her goals as well as a plan for how to accomplish those goals, with an associated timeline.

As a part of her employment, Cohen was subject to periodic classroom observations and was evaluated by the school principal, James A. Harris, Jr. Throughout her employment at Early College, Harris was Cohen’s principal.

In 2013, Harris fielded several complaints about Cohen’s teaching. After receiving the complaints, he conducted an observation and prepared a PDP to go over with her on October 11. He asked Charles Fuller, a director of secondary education, to sit in on the meeting because he didn’t have an assistant principal and he wanted someone to be a witness during the meeting.

On the morning of the meeting, Harris told Cohen that he wanted to go over the observation and PDP with her that day and asked her to stay after school. In the past, he hadn’t given her advance notice of postobservation conferences, but he would typically do most of them at the end of the school day.

At the conclusion of the school day, Cohen was leaving for the weekend when she saw Fuller coming into the building. They greeted each other, and she walked outside. As she was leaving, Harris ran out of the building and called, “Mrs. Cohen, I need you to come back.” She followed him into his office and saw Fuller sitting in a chair inside the office.

Harris explained to Cohen that he was meeting with her because of problems with her teaching and that he had prepared a PDP for her. She refused to sign the PDP and asked for a sheet of paper to instead write that she was being pushed to sign the plan without being able to read it. The meeting lasted approximately 15 to 20 minutes. Cohen continued to argue with Harris until the end of the meeting, at which point all three participants left the school.

Cohen testified that at some point during the meeting with Harris, she began to experience “horrible head pain” and felt as though “her head was going to blow up.” The next day, she went to a doctor, and later that same day, she was also examined by Dr. Mitchell Freedman, a neurologist at Duke Health. Both doctors determined that Cohen had suffered a stroke. She filed a claim for workers’ comp benefits.

Under the North Carolina Workers’ Compensation Act, an injury is compensable if the claimant proves three elements:

In this case, the parties agreed that Cohen’s injury was sustained in the course of her employment, but they disagreed about whether it was caused by an accident. In the context of the Workers’ Compensation Act, the terms “accident” and “injury” do not mean the same thing. An “accident” is an unlooked-for and untoward event that isn’t expected or designed by the injured employee. There must be some unforeseen or unusual event other than the bodily injury itself.

To establish that she was injured because of an accident, Cohen argued that the meeting itself was unusual and resulted in unexpected consequences because (1) Fuller was sitting in on it, (2) a “principaldirected” PDP was utilized, and (3) she left the meeting without signing the PDP. However, the court of appeals wasn’t sympathetic to her claim.

The court observed that Cohen had previously participated in postobservation conferences with Harris. She also knew that other teachers had participated in similar meetings, and she was familiar with the protocol for PDPs. Moreover, just like all teachers at Early College, she had created a PDP for herself on past occasions. And although she hadn’t previously been required to create a principal-directed PDP, Harris had utilized directed PDPs for other teachers at Early College. Thus, a principal-directed PDP wasn’t a meaningful departure from the typical procedures at the school.

With respect to the manner in which the meeting was conducted, the court noted the evidence established that the conversation between Cohen and Harris was neither unexpected nor inappropriate. There was nothing remarkable about Harris providing Cohen negative feedback after observing her class or requiring her to take action to correct deficiencies in her job performance. At most, she received unwelcome critical feedback—an occurrence that isn’t unusual for employees in any job.

The court concluded: “While we do not categorically foreclose the possibility that the existence of unusual circumstances could cause a meeting between an employee and her supervisor to constitute an accident under the Workers’ Compensation Act, we are satisfied that the meeting between Cohen and Harris does not present such a case.”

This decision provides reassurance that routine meetings won’t result in workers’ comp liability, even if they are upsetting to the employee.

The author can be contacted at richard.rainey@wbd-us.com.

The post A Meeting with the Principal Resulted in Teacher’s Stroke: Worker’s Comp Denied appeared first on HR Daily Advisor.