S&P/Case-Shiller released the monthly Home Price Indices for April (“April” is a 3 month average of February, March and April prices).

“Home prices continued their climb with the S&P CoreLogic Case-Shiller National Index up 6.4% in the past 12 months,” says David M. Blitzer Managing Director and Chairman of the Index Committee at S&P Dow Jones Indices. “Cities west of the Rocky Mountains continue to lead price increases with Seattle, Las Vegas and San Francisco ranking 1-2-3 based on price movements in the trailing 12 months. The favorable economy and moderate mortgage rates both support recent gains in housing. One factor pushing prices up is the continued low supply of homes for sale. The months-supply is currently 4.3 months, up from levels below 4 months earlier in the year, but still low.

“Looking back to the peak of the boom in 2006, 10 of the 20 cities tracked by the indices are higher than their peaks; the other ten are below their high points. The National Index is also above its previous all-time high, the 20-city index slightly up versus its peak, and the 10-city is a bit below. However, if one adjusts the price movements for inflation since 2006, a very different picture emerges. Only three cities – Dallas, Denver and Seattle – are ahead in real, or inflation-adjusted, terms. The National Index is 14% below its boom-time peak and Las Vegas, the city with the longest road to a new high, is 47% below its peak when inflation is factored in.”
emphasis added 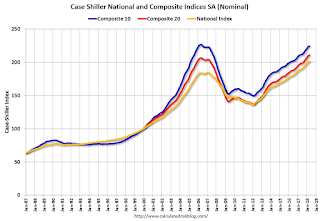 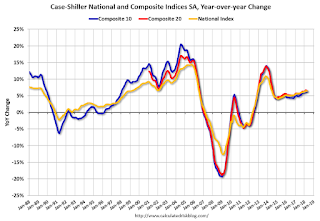 The National index SA is up 6.4% year-over-year.

Note: According to the data, prices increased in 17 of 20 cities month-over-month seasonally adjusted.