As we previously covered, in late May, Roseanne Barr went on a late-night Twitter tirade that included racial insults about a former official in the Obama administration.  ABC responded hours later by condemning Barr’s Twitter statement as “abhorrent, repugnant and inconsistent with [its] values.” The network then cancelled her namesake show. Attempting to explain her behavior, Barr tweeted, “It was 2 in the morning and I was ambien tweeting.” The manufacturer of Ambien quickly responded as follows: 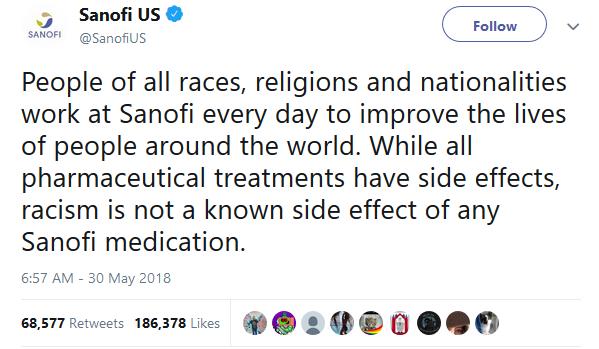 In a tearful interview released over the weekend, Barr reiterated that her she was on Ambien at the time she tweeted. She explained, “There’s no excuse. I don’t excuse it … It’s an explanation. I was impaired you know.”

What Her Explanation Means for Employers

Almost every organization has rules that prohibit inappropriate racial comments similar to those tweeted by Barr. Regardless of whether the scientific research supports her “Ambien made me do it” defense, Barr’s “explanation” begs the question: if an employee’s disability (or side effects from medication taken to treat a disability) causes a violation of a workplace conduct rule, does the Americans with Disabilities Act (ADA) allow an employer to terminate the individual?

According to the Equal Employment Opportunity Commission, the answer is “yes, if the conduct rule is job-related and consistent with business necessity and other employees are held to the same standard.”  See EEOC Guidance on Applying Performance and Conduct Standards to Employees with Disabilities (September 2008), https://www.eeoc.gov/facts/performance-conduct.html#conduct, Question 9; see also EEOC Enforcement Guidance: Reasonable Accommodation and Undue Hardship Under the Americans with Disabilities Act (October 2002), http://www.eeoc.gov/policy/docs/accommodation.html, Question 34. Confirming that employers have wide latitude to develop and enforce conduct rules, the EEOC’s guidance expressly states, “The ADA does not protect employees from the consequences of violating conduct requirements even where the conduct is caused by the disability.”

When an ADA claim makes its way to federal court, however, the judge may defer to the EEOC guidance referenced above but she is not bound by it. In fact, federal courts across the country take differing approaches on the lawfulness of terminating an employee for misconduct attributable to a disability. Thus, whether a federal court will require your organization to accommodate misconduct depends on the location of the worker and the workplace. For example, according to existing case law in the Fourth Circuit (which has jurisdiction over MD, VA, WW, NC, and SC), a disabled person can be lawfully terminated for disability related misconduct—so long as the employer’s explanation is not a pretext for discrimination. See Jones v. Am. Postal Workers Union, 192 F.3d 417, 429 (4th Cir. 1999). In contrast, employers in the Ninth Circuit (covering AL, AZ, CA, HI, ID, MT, NV, OR, and WA) and Tenth Circuit (CO, KS, NM, OK, UT, WY) must tread more carefully.  Depending on the circumstances, the courts in those jurisdictions may excuse misconduct of an employee whose disability is offered as an after-the-fact excuse.

Of course, when an individual engages in misconduct that results in disciplinary action short of termination, the employer must engage in an interactive process to determine if it can provide a reasonable accommodation to enable the employee to avoid future violations of the company rule. When it comes to accommodations, the Job Accommodation Network (JAN), as mentioned in a prior post, is a great resource to help employers understand behaviors stemming from a disability and identify workplace accommodations.

The post “Ambien Made Me Do It!” appeared first on HR Daily Advisor.