In order to start snoozing keywords, users will first have to come across a post that includes the keyword they want to avoid, as there’s no dedicated section to enter keywords into. Facebook has said that a “preemptive snooze option” is being looked into and could be added in the next few weeks. 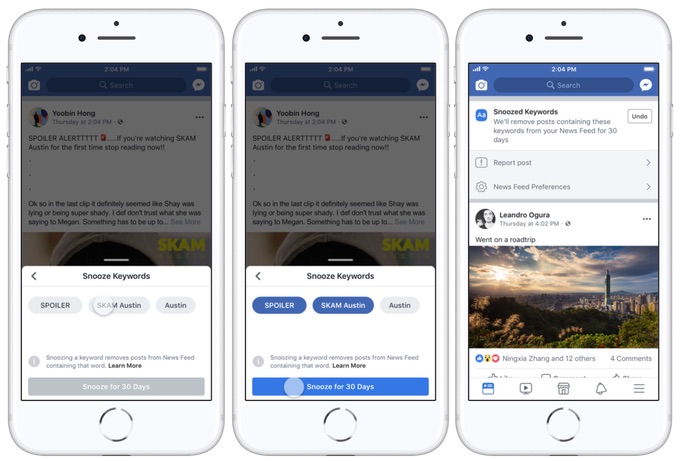 For now, once a post is spotted users will find a new “Snooze keywords in this post” option in the ellipsis drop-down menu. From there, Facebook will generate a list of nouns gathered from the post that are available to snooze for one month. TechCrunch gave one example of how this might work for avoiding spoilers in the World Cup:

Tapping that reveals a list of nouns from the post you might want to nix, without common words like “the” in the way. So if you used the feature on a post that said “England won its World Cup game against Tunisia! Yes!”, the feature would pull out “World Cup”, “England”, and “Tunisia”. Select all that you want to snooze, and posts containing them will be hidden for a month. Currently, the feature only works on text, not images, and won’t suggest synonyms you might want to snooze as well.

Ads won’t be affected by snoozed keywords, so if you snooze something related to a movie the feature will only hide posts by friends and groups, but not ad posts encouraging Facebook users to visit the film’s page or buy tickets.

In regards to the 30-day limit, Facebook mentioned that it is open to expanding the snooze feature if it hears from people “that they want more or less time,” but didn’t confirm an unlimited ability to snooze keywords. In comparison, Twitter and many related third-party clients offer the ability for users to mute keywords, users, hashtags, and more for as long as they want.

For Facebook’s keyword snooze feature, a “small percentage of users” will see the update today ahead of a wider rollout in the coming weeks.