The national average asking rent increased 1.3% in the first quarter while effective rents, which net out landlord concessions, increased 1.2%. At $1,404 per unit (market) and $1,337 per unit (effective), the average rents have increased 4.4% and 4.0%, respectively, from the second quarter of 2017.

Net absorption was 37,265 units, slightly above last quarter’s absorption of 36,124 units but below the average quarterly absorption of 2017 of 46,031 units. Construction was 50,360 units, higher than the first quarter’s 50,244 units but below the 2017 quarterly average of 60,514 units. We still expect total construction for 2018 to surpass that of 2017.
…
The apartment market had slowed at the end of 2017 and early 2018 as the housing market started to accelerate. Momentum in the housing market, however, recently slowed as indicated by recent existing home sales results. These shifts are likely due to the Tax Reform and Jobs Act that doubled the standard deduction and cut the deductibility of state, local and property taxes which lowered the incentive to buy a home.

We expect construction to remain robust for the rest of 2018 and in early 2019 before completions drop off in subsequent periods. Occupancy is expected to remain positive, although vacancy rates are expected to continue to increase as new supply will outpace demand growth. Still, as long as job growth remains positive, we expect rent growth to remain positive over the next few quarters.
emphasis added 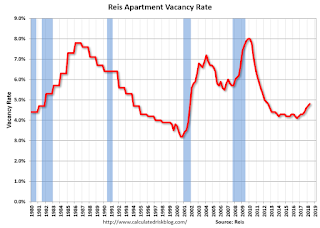 This graph shows the apartment vacancy rate starting in 1980. (Annual rate before 1999, quarterly starting in 1999). Note: Reis is just for large cities.