Note the comments on tariffs.

From the Kansas City Fed: Tenth District Manufacturing Activity Continued to Expand at a Rapid Pace

“The composite index remained strong for the third consecutive month, and many firms reported difficulties finding qualified workers,” said Wilkerson. “Prices indexes remained at high levels.”
…
The month-over-month composite index was 28 in June, similar to the reading of 29 in May and higher than 26 in April. The composite index is an average of the production, new orders, employment, supplier delivery time, and raw materials inventory indexes. Factory activity increased at durable and nondurable goods plants, particularly for computer, electronics, and food products. Most month-over-month indexes were slightly lower than the previous month, but all indexes remained at high levels. The production index edged down from 41 to 38, and the volume of shipments and new orders for exports indexes eased slightly. The employment index was unchanged, while the new orders and order backlog indexes saw a modest decline. The raw materials inventory index improved from 19 to 27, and the finished goods inventory index also increased.

“The steel tariffs are not helpful. Material prices are rising and these costs have to be passed along to the consumer.”

“Bracing for the worst concerning China tariffs. We will move the last of manufacturing off shore. Loss of business due to tariffs will have a larger impact than interest rates.”

“Working on a record year, but we are closely monitoring price increases from suppliers due to new tariffs.”
emphasis added

This was the last of the regional Fed surveys for June. 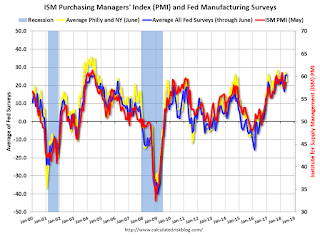 Based on these regional surveys, it is possible the ISM manufacturing index will be close to 60 in June (to be released on Monday, July 2nd).