With 3.8 million square feet of negative net absorption brought on by the Toys “R” Us store closings, the U.S. Retail Vacancy Rate climbed 0.2% to 10.2% in the second quarter. Rent growth was positive at 0.2%.

After withstanding the hundreds if not thousands of store closings over the last 18 months, the neighborhood and community shopping center industry suffered its worst quarter in nine years with negative net absorption of 3.8 million square feet. This pushed the overall vacancy rate to 10.2% from 10.0 percent where it had held steady for the four previous quarters.

The national average asking rent increased 0.2% in the second quarter as did the effective rent which nets out landlord concessions. At $21.01 per square foot (market) and $18.39 per square foot (effective), the average rents have increased 1.7% and 1.8%, respectively, since the second quarter of 2017.
…
Conclusion
The Toys “R” Us store closings impacted the second quarter statistics more than any other retailer has in any quarter over the last nine years. In the Reis property inventory, we tracked more than 80 total Toys “R” Us store closings in 40+ different metros in the quarter. Moreover, other retailers continued to shut down operations in the quarter including Winn-Dixie with eight closed stores in our inventory, Kmart with seven stores and Harvey with five closed stores. Very few metros saw significant positive net absorption, but a few gyms and trampoline parks opened in some metros along with TJ Maxx, Target, Aldi’s, Gabe’s and Bob Mills.

That said, we believe most of the Toys “R” Us stores are now closed and that most of the negative net absorption is behind us. Although we do not expect the vacancy rate to improve in the near future, it will not increase that much more in the coming quarters.

Oddly, rent growth has remained positive despite the higher vacancy. We suspect that rents will stay flat for some time. Finally, we have a few new construction projects in the pipeline, but have seen a number of older and obsolete shopping centers sold as development sites. We expect any new completions will be few and far between and could get offset by conversions or demolitions.
emphasis added 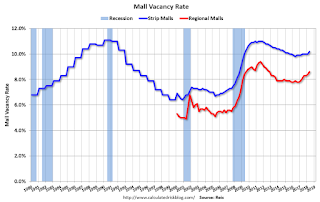 This graph shows the strip mall vacancy rate starting in 1980 (prior to 2000 the data is annual). The regional mall data starts in 2000. Back in the ’80s, there was overbuilding in the mall sector even as the vacancy rate was rising. This was due to the very loose commercial lending that led to the S&L crisis.

Recently both the strip mall and regional mall vacancy rates have increased from an already elevated level.