Apple’s 2018 iPhones are expected to include a new 6-core A12 processor, and the A12, like all of Apple’s processor iterations, is expected to bring speed and efficiency improvements. A new benchmark taken from a 2018 iPhone may give us some insight into just how much faster the new A12 is than the A11 in the iPhone X, provided the benchmark is legitimate.

Uploaded to Geekbench 4 on June 27 (via French site iGeneration), the benchmark for the 2018 iPhone suggests a single-core score of 4673 and a multi-core score of 10912. 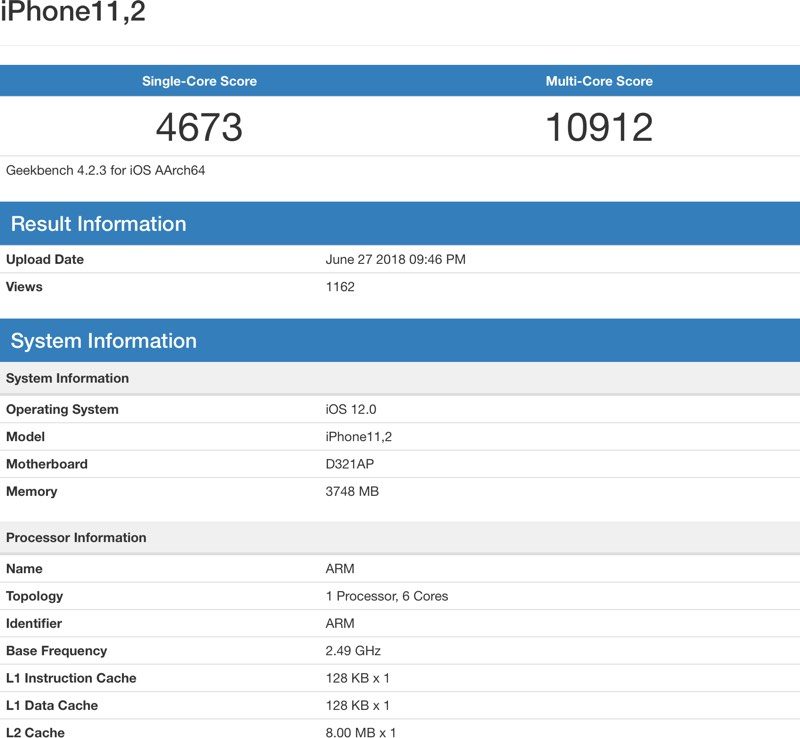 Compute scores for the 2018 iPhone were also included, and it features a Metal score of 21691. Compared to the iPhone X’s Metal score of 15234, the result suggests GPU improvements. 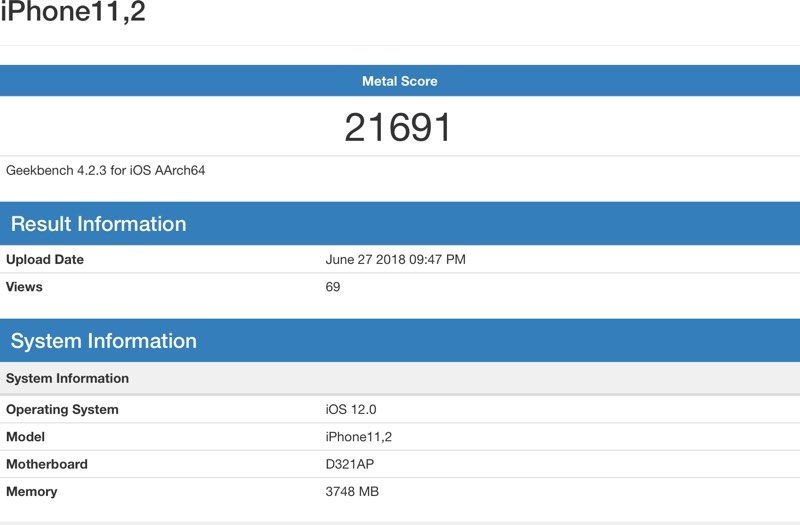 We don’t know which of the three iPhones was benchmarked using Geekbench 4, but so far, rumors suggest that all three will use the same A12 chip. The iPhone is labeled “11,2,” and it is running a version of iOS 12.

Notably, the benchmarked device appears to include 4GB RAM, up from 3GB RAM in the iPhone X. Well-respected Apple analyst Ming-Chi Kuo has suggested the two OLED iPhones coming in 2018 will feature 4GB RAM while the lower-priced LCD model will continue to feature 3GB RAM, suggesting the benchmark may pertain to one of the OLED models.

We can’t confirm the veracity of the benchmark because it’s not impossible to fake these results, but early benchmarks do sometimes pop up in the months ahead of a new device’s release because there are prototype iPhones being tested by Apple employees who may have opted to run the Geekbench 4 app.

We asked Geekbench founder John Poole about the results, and he said there was nothing “obviously wrong” that stood out, but he did warn that he had not yet had time to dig into the scores.

Apple in 2018 is rumored to be introducing three new iPhones, all of which will feature upgraded processors, faster LTE speeds, a TrueDepth camera system, slimmer bezels, and no Home button, as Apple is transitioning to an all Face ID lineup. We’re expecting a 5.8-inch OLED that’s identical in design to the current iPhone X (but perhaps with a new gold color), a larger 6.5-inch OLED device that can be thought of as an “iPhone X Plus,” and a 6.1-inch LCD device that will be available at a lower price point.

The two OLED devices are expected to include better camera technology, with Apple sticking to dual-cameras for those iPhones. The LCD device, meanwhile, may only feature a single-lens camera.