Total nonfarm payroll employment increased by 213,000 in June, and the unemployment rate rose to 4.0 percent, the U.S. Bureau of Labor Statistics reported today. Job growth occurred in professional and business services, manufacturing, and health care, while retail trade lost jobs.
…
The change in total nonfarm payroll employment for April was revised up from +159,000 to +175,000, and the change for May was revised up from +223,000 to +244,000. With these revisions, employment gains in April and May combined were 37,000 more than previously reported.
…
In June, average hourly earnings for all employees on private nonfarm payrolls rose by 5 cents to $26.98. Over the year, average hourly earnings have increased by 72 cents, or 2.7 percent.
emphasis added 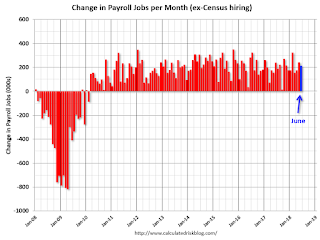 The first graph shows the monthly change in payroll jobs, ex-Census (meaning the impact of the decennial Census temporary hires and layoffs is removed – mostly in 2010 – to show the underlying payroll changes).

Payrolls for March and April were revised up by a combined 37 thousand. 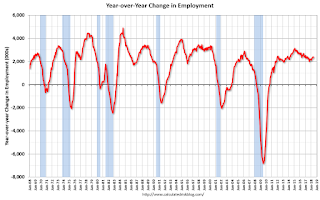 In June the year-over-year change was 2.374 million jobs.

The third graph shows the employment population ratio and the participation rate. 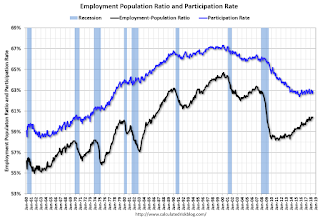 The Labor Force Participation Rate increased in June to 62.9%. This is the percentage of the working age population in the labor force.   A large portion of the recent decline in the participation rate is due to demographics.

The Employment-Population ratio was unchanged at 60.4% (black line). 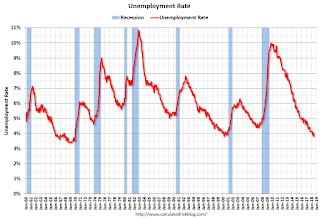 The unemployment rate increased in June to 4.0%.

This was above the consensus expectations of 190,000 jobs, and the previous two months combined were revised up by 37,000.  A strong report.

I’ll have much more later …