Rent growth, in contrast, was healthier in the last two quarters than in the previous seven as a number of metros had rent growth of 1% or more in the quarter and 4% for the year. The national average asking rent increased 0.7% in the second quarter as did the effective rent which nets out landlord concessions. At $33.07 per square foot (asking) and $26.83 per square foot (effective), the average rents have increased 2.5% and 2.6%, respectively, since the second quarter of 2017.
…
In short, the office market statistics reflect the net growth between the haves and the have-nots: larger markets in the West, South Atlantic, Texas, Boston and New York with healthy occupancy and rent growth offset by tepid growth or declines in smaller, suburban markets mostly in less densely populated areas. Much of the growth can be attributed to gains in technology: 9.6% of the added office jobs this year were in the Computer Systems Design industry that should continue to fuel office gains in most of these cities.

The next big question is: What city will Amazon select for its HQ2? The answer to this could come before Reis releases its third quarter statistics. That news will certainly generate considerable discussion not only about the “winning” city but on the reasons why the others lost out. 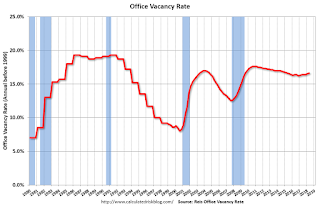 This graph shows the office vacancy rate starting in 1980 (prior to 1999 the data is annual).

Reis reported the vacancy rate was at 16.6% in Q2.  The office vacancy rate had been mostly moving sideways at an elevated level, but has increased recently.