Black Knight Mortgage Monitor for May

This gives a total of 4.23% delinquent or in foreclosure.

Today, the Data & Analytics division of Black Knight, Inc.released its latest Mortgage Monitor Report, based on data as of the end of May 2018. This month, the company looks again at tappable equity, or the share of equity available for homeowners with mortgages to borrow against before reaching a maximum total combined loan-to-value (LTV) ratio of 80 percent. Despite the record-setting growth in such equity seen in the first quarter of 2018, homeowners are withdrawing equity at a lower rate than in the past. As Ben Graboske, executive vice president of Black Knight’s Data & Analytics division explained, although total equity withdrawn by dollar amount has increased slightly since the same time last year, the rate of growth pales in comparison to that of tappable equity.

“In Q1 2018, homeowners with mortgages withdrew $63 billion in equity via cash-out refinances or HELOCs,” said Graboske. “That represents a slight one percent increase from the same time last year, despite the fact that the amount of equity available for homeowners to borrow against increased by 16 percent over the same time period. Collectively, American homeowners now have $5.8 trillion in tappable equity available, yet only 1.17 percent of that total was withdrawn in the first quarter of the year. That’s the lowest quarterly share in four years, and the second lowest since the housing recovery began six years ago. Somewhat surprisingly, even though rising first-lien interest rates normally produce an increase in HELOC lending, the volume of equity withdrawn via lines of credit dropped to a two-year low as well.

“One driving factor in the decline of HELOC equity utilization is likely the increasing spread between first-lien mortgage interest rates – which are tied most closely to 10-year Treasury yields – and those of HELOCs – which are more closely tied to the federal funds rate. As of late last year, the difference between a HELOC rate and a first-lien rate had widened to 1.5 percent, the widest spread we’ve seen since we began comparing the two rates 10 years ago. The distance between the two has closed somewhat in Q2 as 30-year mortgage rates have been on the rise, which does suggest the market remains ripe for relatively low-risk HELOC lending expansion. Still, increasing costs in the form of higher interest rates do appear to have impacted homeowners’ borrowing decisions in Q1 2018. We should also remember that the Federal Reserve raised its target interest rate again at its June meeting, which will likely further increase the standard interest rate on HELOCs in Q3 2018. Black Knight will continue to monitor the situation moving forward.” 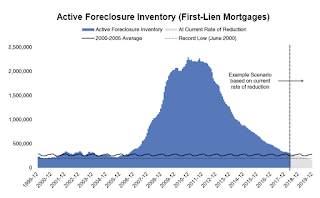 This graph from Black Knight shows the number of active foreclosure since 2000.

• The number of active foreclosures has declined from 2.3M at the peak in December 2010 to just 303k remaining today

• At the current rate of improvement (-29% Y/Y), the national foreclosure rate is on pace to ‘normalize’ (to the 2000-2005 average) within the next three months

• Given the various factors noted on the previous page, we may see foreclosure volumes dip even further

• Holding today’s rate of improvement steady, both foreclosure rates and active foreclosure inventory would fall to the lowest level this century within the next 18 months 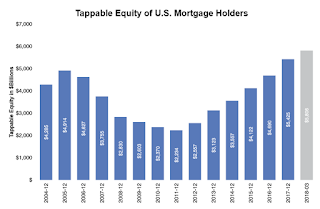 • A total of $5.8T in tappable equity now held by U.S. homeowners with mortgages represents the highest volume ever recorded, and 16% above the mid-2006 peak

• Additionally, declining current combined LTVs (CLTV) – now 52% on average, the lowest ever recorded by Black Knight – mean that the majority of home price gains are immediately eligible to be tapped