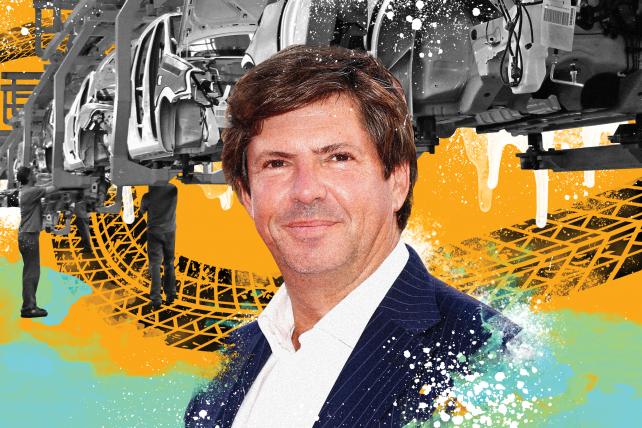 Olivier Francois sits shotgun in a Jeep Compass parked in a sun-splashed lot fronting a music studio near West Hollywood. Inside the shiny black SUV, an Apple rep gives the Fiat Chrysler Automobiles marketing chief a demo of CarPlay, the in-dash iPhone digital display. Francois interrupts. “Siri does not speak my language,” the Paris-born executive says, half joking, before being assured that, indeed, Siri can be set to speak French.

But music is the only language that seems to matter to Francois on this late June morning. The Frenchmanknown for selling the American dream in the form of big-budget ads starring Eminem, Clint Eastwood and countless other celebritiesis inside the Warner Music Group studio minutes later announcing his latest star-studded campaign. The ad blitz includes songs from 10 artists, from Alice Cooper to OneRepublic, whose frontman Ryan Tedder is an invited guest at the event, along with entertainment media and music industry execs.

“Each of our brands has its own sound, its own score, its own playlist,” Francois boasts before showing off the ads. The effortwhich plugs free six-month Apple Music streaming subscriptions for buyers of Jeep, Chrysler, Dodge, Ram and Fiat vehiclesis the kind of glitzy Hollywood collaboration in which Francois revels.

Global advertising spending to grow to US$615b this year

To stand up against giants, new-age advertising platforms must go ‘vertical’

onlyinfotech Feb 20, 2020
We’ve all done it: snagged a cookie when mom wasn’t looking, had a little too much wine for dinner, let the car…
Leadership

What to Do When Your Boss Is the Conflict

How to Login to Your WordPress Site Admin Dashboard

The Most Common Misconceptions About Dropshipping in 2020

Google is cracking down on Android apps that track location

How To Make and Receive WhatsApp Calls From PC

How to Develop and Share Your Insights to Create Alternatives

Google Will Slow Crawling For 429/503 HTTP Status Codes But…

5 simple tech tips that will make your life easier

Top 7 ways to delete yourself from the internet

Huawei’s next Google-free flagship to be unveiled in Paris…

Mozilla rolls out DNS over HTTPS by default for U.S. Firefox…

Android Studio 3.6 with Google Maps in the Android Emulator